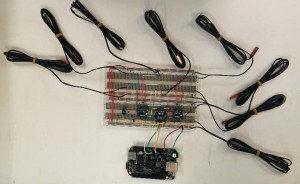 A CBEI team of researchers led by Jim Braun of Purdue University has successfully implemented the use of virtual sensors within a low-cost microprocessor. The team developed an initial prototype and performed an initial hardware cost study that showed that the system has a relatively low cost, making future commercialization viable. Virtual sensors have the ability to estimate physical qualities that may be too expensive to measure directly. Applying virtual sensors to fault detection and diagnostics (FDD) methodologies in HVAC units can improve the sensitivity and accuracy of measurements without significantly increasing the cost for instrumentation. Virtual sensor based FDD protocols are able to detect and diagnose multiple faults simultaneously

This milestone marks another important step forward in the effort to embed virtual sensor technologies into HVAC systems, specifically in rooftop units (RTUs). CBEI researchers write that “studies have shown that RTUs tend to be poorly maintained and significant energy may be wasted annually due to unnoticed or unrepaired equipment faults.” This finding is fairly intuitive when we consider that these units are located on rooftops and performance losses are associated with fouling of air intakes and other issues that develop over time. Building on positive early results with FDD, the team has been working to alleviate market concerns that have kept manufacturers from incorporating FDD into their equipment.

Manufacturers are slow to install FDD technology because the technology has not been low-cost and easy enough to install, manufacturers perceive uncertainty about the saving potential and economic benefit of the technology, and there has been a lack of integration and interoperability between FDD and other building technologies. The team is addressing all of these barriers by designing and implementing a suite of virtual sensors – refrigerant charge, cooling capacity, and coefficient of performance – using a low-cost microprocessor with four direct temperature (or pressure) measurements. “Ultimately, this virtual sensor package can be integrated within a RTU FDD system to provide an extensive fault detection and diagnostics capability,” the researchers write, and they’ll be able to do so without breaking the bank.